Note 11/19/19: In Promising The Moon (written 2014), I argued that technological progress had not slowed from 1970 to the present (compared to its pre-1970 speed). Since then, research by a bunch of people (summarized very well here by Tyler Cowen) finds strong evidence that it has. Despite its confidence and snark, my 2014 post was wrong.

You explain that cameras, which 1969 knows as bulky boxes full of film that takes several days to get developed in dark rooms, are now instant affairs of point-click-send-to-friend that are also much higher quality. Also they can take video.

Music used to be big expensive records, and now you can fit 3,000 songs on an iPod and get them all for free if you know how to pirate or scrape the audio off of YouTube.

Television not only has gone HDTV and plasma-screen, but your choices have gone from “whatever’s on now” and “whatever is in theaters” all the way to “nearly every show or movie that has ever been filmed, whenever you want it”.

Lasers have gone from only working in special cryogenic chambers to working at room temperature to fitting in your pocket to being ubiquitious in things as basic as supermarket checkout counters.

Telephones have gone from rotary-dial wire-connected phones that still sometimes connected to switchboards, to cell phones that fit in a pocket. But even better is bypassing them entirely and making video calls with anyone anywhere in the world for free.

Robots now vacuum houses, mow lawns, clean office buildings, perform surgery, participate in disaster relief efforts, and drive cars better than humans. Occasionally if you are a bad person a robot will swoop down out of the sky and kill you.

We have a box which you can type something into and it will tell you everything anyone has ever written relevant to your query.

We have a place where you can log into from anywhere in the world and get access to approximately all human knowledge, from the scores of every game in the 1956 Roller Hockey World Cup to 85 different side effects of an obsolete antipsychotic medication. It is all searchable instantaneously. Its main problem is that people try to add so much information to it that its (volunteer) staff are constantly busy deleting information that might be extraneous.

We have navigation technology that over fifty years has gone from “map and compass” to “you can say the name of your destination and a small box will tell you step by step which way you should be going”.

We have the aforementioned camera, TV, music, videophone, video games, search engine, encyclopedia, universal translator, and navigation system all bundled together into a small black rectangle that fits in your pockets, responds to your spoken natural-language commands, and costs so little that Ethiopian subsistence farmers routinely use them to sell their cows.

But, you tell 1969, we have something more astonishing still. Something even more unimaginable.

“We have,” you say, “people who believe technology has stalled over the past forty-five years.”

It’s the anniversary of the moon landing, which means I have to deal with people passing around memes like this: 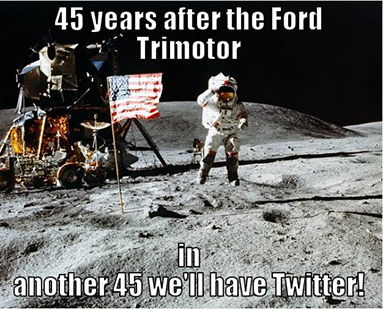 But I probably can’t blame the date for the recent discussion here of whether technological progress halted in 1972.

So I would like to take a moment to critique a certain strain of futurology.

There seems to be this thing where people imagine something that would look really cool, and predict that if we work hard on it for fifty years, we’ll be able to pull it off. And then fifty years later, when barely any work has been done on it at all, they start looking for someone to blame.

Why haven’t we colonized space yet? For the same reason we haven’t colonized Antarctica. It’s very cold and not a lot of fun and if you go outside you die.

I will maintain that even if we had enough space flight technology that elementary school classes routinely took field trips to Mars, Mars would end up with two or three scientific bases, a resort where tourists could take their pictures on Olympus Mons, a compound of very dedicated libertarians, and nothing else. No domed cities. No colonies fighting for independence. Think that’s implausible? School children take field trips to the Mojave Desert all the time, and it pretty much looks like that. Why should Mars prosper more than a much more habitable comparison area?

Likewise, the reason we don’t build undersea domes isn’t because we’re not good enough. It’s because humans breath better on land, and there’s still a lot of land left to live in. On the rare occasion we want a resource located underwater, we build an oil rig on top of it and pump it from the surface, ie the part of the ocean where you don’t get insta-crushed by ten atmospheres of pressure if something goes wrong.

Science fiction authors and would-be prophets stubbornly refuse to admit “would anybody reasonably pay money for this?” into their calculations. And so every ten years they end up predicting the “smart house”. Where from your phone, you can control the lights in any room of the house! I imagine futurologists sitting in their kitchens, thinking “Oh no! I wish the lights were on in my bedroom, but all I have is my phone!” Maybe one day we will have houses that contain teleporters that can bring to any other building in the world without stepping outside. But if you’re in the kitchen and you want the light on in the teleporter room, you’ll still just walk to the teleporter room and flip the @#$%ing switch.

I am not defending this as a normative view of how progress should work. There is a lot to be said for colonizing Mars as a survival strategy in case something unexpected happens to Earth. And there’s also a lot to be said for Manhattan Project style efforts to discover a technology in a non-hill-climbing way, something where there’s not a profitable transitional form at each step between where we are and what we want. But I would suggest we stick to those criticisms, and not to a criticism of advance per se.

(actually, we’re not even all that bad at getting past the hill-climbing thing; government subsidies to solar seem to have been a very successful attempt to push solar out of an area where it wasn’t profitable to improve into an area where it is)

But it’s going to take some pretty creative accounting to make moon shots profitable. The main reason people funded the moon landing in 1969 (as opposed to the reason that people not involved in funding felt good about it) was to beat Russia and then get to rub it in their face forever. Nowadays that’s no longer so fun (although rapidly becoming funner!). Therefore, we get the expected outcome of fewer moon shots until someone else thinks of a compelling incentive to go to the moon. So far there isn’t one. There’s no need to bring technological stagnation into the picture.

In Favor of Niceness, Community, and CivilizationHomeReactionary Philosophy In An Enormous Planet Sized Nutshell